MATT MUSICO IS A COLLEGE COUNSELOR BY DAY AND BASEBALL WRITER BY NIGHT. HE'S ENJOYED WRITING ABOUT SPORTS FOR THE PAST 10 YEARS, EVEN THOUGH HE'S MOSTLY TALKING ABOUT THE METS. FIND HIM ON TWITTER @MMUSICO8 TO TALK BASEBALL.

If you surf over to Google and do an image search for “Babe Ruth and Lou Gehrig,” most of the results feature the baseball deities on the field, in uniform, companionably perched next to one another, maybe talking, maybe smiling, maybe shaking hands.

They look happy and content, and why shouldn’t they? Their New York Yankees squad was considered to be the best team in Major League Baseball’s short history, and Ruth and Gehrig were tearing up opposing pitchers, plus, best of all, they were pals.

On the fateful afternoon, Ruth’s daughter Dorothy and his stepdaughter Julia popped over to Chez Gehrig, where Gehrig’s mother commented that Dorothy’s clothes weren’t nearly as nice as Julia’s. Ruth’s wife Claire heard about this, was outraged, and reported the diss to Babe, who was equally outraged.

The following day, when Ruth entered the clubhouse, he told Gehrig, “Your mother should mind her own goddamned business,” and “Never speak to me again off the field.” More words were exchanged—many of them not printable here—and the two had to be separated.

One can only imagine how bad it would’ve gotten if Twitter was a thing.

Even a century later, the Ruth/Gehrig edition of the Yankees—justifiably nicknamed “Murderers’ Row”—is still the gold standard to which all great Major League Baseball teams are measured.

In April of 2020, Yahoo! Sports conducted a 16-team reader-voted tournament to see who fans felt was best team ever. The 1927 Yankees didn’t just win, they wiped the floor with their opponents in each round.

Murderers’ Row finished the 1927 regular season with an incredible 110-44 record, tying them with the 1909 Pittsburgh Pirates for the fourth highest single season win total in MLB history. When looking at the teams ahead of them in the record book, it clear as to why the 1927 Yankees are so revered. The 1906 Chicago Cubs (116 wins) and 1954 Cleveland Indians (111) both lost in the World Series, while the 2001 Seattle Mariners lost in the American League Championship Series. What those teams accomplished in the regular season is impressive, but as the championship-era Chicago Bulls used to say, it don’t mean a thing without the ring.

As for the other two teams above the ’27 Yanks in the win column, the 1998 version of the Bronx Bombers won 114 games and took home the World Series title…but teams played 162 regular season games, while their old school counterparts only needed 154. That 1909 Pirates squad also won a championship, but required seven games to get the job done, while Murderers Row swept the Pirates in the 1927 Fall Classic.

So what made this club so good? If we use advanced statistics, we can see that despite playing just seven years after the dead-ball era—not to mention that performance enhancing drugs weren’t an issue—the ’27 Yankees are still comfortably at the top when it comes to overall value of position players. The fact that they boasted six eventual Hall of Famers (Ruth, Gehrig, Earle Combs, Tony Lazzari, Waite Hoyte, and Herb Pennock) also helps their “best ever” case.

Regardless of how many Hall of Famers manager Miller Huggins trotted out onto the field, Ruth and Gehrig were the straws that stirred the drink. In 151 games played in 1927, Ruth slashed .356/.486/.772 with 60 homers, 165 RBI, and 158 runs scored, while Gehrig slashed .373/.474/.765 with 47 home runs, 52 doubles, and 173 RBI in 717 plate appearances. Ruth’s 60 dingers broke his own single season homer record, while Gehrig led the league in RBI, doubles, and total bases en route to winning his first of two MVP awards. To this day, advanced metrics pin these individual performances as two of the top seven ever since 1900. [Ruth hr] [Gehrig hr]

But this partnership—this synergy—almost never came to be, because Ruth almost partied himself to death.

In 1925, the 30-year-old Ruth, was, by many accounts, a man who knew how to, as they say, live life to the fullest. The big guy still put up good numbers in Spring Training that year, but weighed in at about 270 pounds and collapsed twice, once in Asheville, North Carolina, and once in New York. What was rumored to be a death was actually an ulcer, which led to an operation and a month of bed rest. Reporters who knew about Ruth’s predilection for women and alcohol aptly referred to it as, “The Bellyache Heard ‘Round the World.”

Imagine what could’ve been if Ruth had taken care of himself.

As possibly the most lethal duo in baseball history, it seemed like George Herman Ruth and Henrich Ludwig Gehrig rewrote the record books every time they took the field.

Without Ruth and Gehrig—and without those transcendent Yankees teams—baseball history would’ve been considerably duller. Their Yankees franchise’s 27 titles are the most in North American professional sports history, and it’s almost laughable to see how this accomplishment ranks within baseball itself. They’ve appeared in the Fall Classic 40 times, meaning they’ve lost more World Series (13) than any other team has won.

Whenever we want to articulate what is means to be the best in any sport, the Bronx Bombers are typically used as a metaphor. For instance, the New England Patriots, who have been among the NFL’s elite for two decades, are viewed as “the Yankees of football.” As for the visuals, the Yanks’ navy blue/white color scheme and interlocking “NY” logo give them one of the most recognizable brands in any industry.

This is part of the reason why the organization is constantly among the most valuable professional sports teams in the world, and easily baseball’s most lucrative. Forbes has been doing MLB team valuations for 23 years, and the Bronx Bombers have topped every single list. Their 2020 vaulation was $5 billion, almost $2 billion ahead of the second place Los Angeles Dodgers.

Without Ruth and Gehrig launching the Yanks into the stratosphere, who knows, all those titles, all that merch revenue, all the gate receipts, and all of those lofty metaphors might now belong to the Boston Red Sox.

And for that, Yankees fans rejoice. 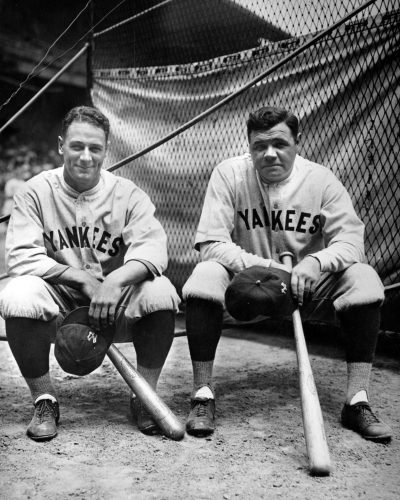 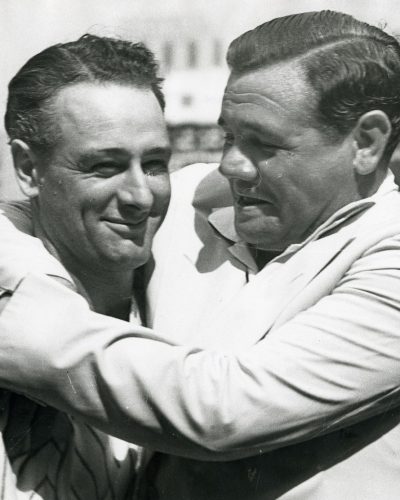 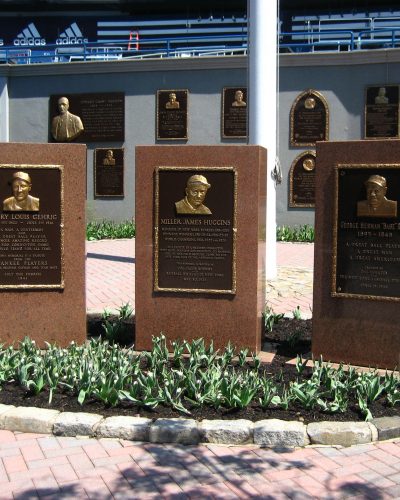 The Ruth/Gehrig battle continued for years.

Once Ruth’s playing days were over, he campaigned to become the Yankees manager, and Gehrig never endorsed it. Naturally, this irked the Great Bambino, so he publicly belittled the Iron Horse’s consecutive games-played streak, which eventually settled in at 2,130 straight contests. [Ruth Gehrig standing]

The two were at odds with one another until Lou Gehrig Appreciation Day in 1939, the iconic afternoon when the first baseman gave his famous speech proclaiming himself to be the luckiest man on the face of the Earth. Following those words from a clearly emotional Gehrig, Ruth put their differences aside by giving him a huge hug of support.

Yet the public was, more or less, shielded from this Cold War. To the outside world, the two titans of the diamond were pals—just look at the photos!—but the fact of the matter is that during the latter part of their relationship, their championship-level synergy turned to tangible dislike. But despite those differences, their untouchable legacies will forever be intertwined. If it wasn’t for their professionalism and ability to put aside all that tension between them when on the field, what they eventually accomplished likely would’ve never come to full fruition, or mean nearly as much to today’s players and fans.

But that synergy, man, it was transcendent, and it propelled the most dominant baseball team of all-time. It’s only fitting that their retired numbers will sit alongside one another in Yankees’ Monument Park for the rest of eternity.