Michael writes the backs of the baseball cards for Topps and also features for The Wall Street Journal, FiveThirtyEight and The Athletic. He is a lifelong collector.

The first pack of baseball cards that I bought was a 1971 Topps. Many classmates in the first grade at St. George’s in Paterson, New Jersey did the same thing.

We roughed them up pretty good and pretty fast—and they were so easy to rough up.

Every day during lunch, five or six of us would form a circle on the playground and flip the cards, back to front. The highest team name in alphabetical order got all the cards. About the third day of doing this, I decided to just bring my Yankees, White Sox, Twins, Tigers, Senators and Royals to school. I stacked the deck.

At the end of the play period, I had everyone’s cards. No one had ever witnessed such a run of “luck” before. But the kids cried to the Mother Superior who took all the cards from me, including the ones I brought to school. I guess it was cheating, but I was too young to even know what that meant. I thought I just figured out how to win a schoolyard game.

What I didn’t know then is that I had begun a lifetime of collecting. After all, I really wanted those cards, clearly more so than the other kids. I mean, I devised a plan.

A few years later, at age 11—and back before work papers were required—I washed dishes and provided kitchen help at a family friend’s restaurant because I wanted a new Little League glove…and a Baseball Encyclopedia, too. It was supposed to be just for a weekend but then I realized I liked money and stayed on. That, along with an afternoon paper route, financed a pretty well-heeled card collection. I bought the new ones by the box, and I indulged in vintage cards including Ty Cobb, Babe Ruth and Lou Gehrig. I had a rookie Jackie Robinson.

I pumped about four grand into my vintage cards through high school, by which time I had elevated to busboy.

But before long I had no housing between college semesters. I had to hock the cards to finance a cross country trip and back. I got pennies on the dollar for them, which haunted me for decades considering the sweat that went into purchasing them.

About five years ago, I decided to get back in—hard. Call it a mid-life crisis. Some guys that age buy sports cars or worse. Me, I rekindled the feeling of youth by collecting again.

Before long, I channeled the regret of my lost childhood collection into articles about baseball cards for the Wall Street Journal. My collecting goals were modest—buy cards likely to be cash equivalents (in other words, inner-circle Hall of Famers that likely would bounce back to what I paid even if there was a dip).

I wasn’t collecting as an investment. I was collecting for fun. The profit was the pleasure.

Little did I know that another baseball card boom was right around the corner.

My colleagues knew about my interest in cards through the articles I wrote. One night, at a mixer for sports people, I was asked what I thought about the new Topps set. I said I actually preferred the old designs, how I wrote about Mickey Mantle cards for the Journal and how they’re all like little gems, the old Topps designs. I said how I loved the cartoons and reading the card backs, too. The Sparky Lyle-like mustachioed man asked my favorite all-time design, and I instantly said that 1971 Topps.

“What about writing the card back?” he asked. I confess, that’s something that I never thought about people doing. I, of course, knew it happened. But it’s like thinking of who makes toys. Maybe elves wrote the card backs? But I said, “Of course I would love to,” not knowing the person I was talking to was a Topps executive. And it turned out the next set they’d be working on would be the throwback to 1971 Topps design.

This was going to be a gig, but my collecting hairs were standing on end. If I was going to write the Topps Heritage set based on the 1971 set, shouldn’t I own the 1971 set? The answer seemed obvious. The problem was that I had long resolved to never be the guy at the card show hunched over a table sitting on a folding chair checking off the No. 763 Ron Hansen he needs to complete a set.

Starting a vintage set foray with 1971 Topps is borderline insane. No set has ever been as condition sensitive. You look at those cards the wrong way and a white speck will form on a front corner. The centering is often a problem. You can pull them from a sealed pack from 1971 and be assured of only 6s (EX-MT) and MAYBE 7s (NM), given how likely they are to be docked for centering. Eh, it was probably a just a dream. Finding a nice 1971 set that’s remotely affordable would be next to impossible.

But collector kismet followed once again. It turned out a dealer who I regularly saw at a monthly Police Athletic League show—and who always had the nicest cards around—had just come into a big score. A now-old-timer had bought two sets of every set from every year the year they were issued by all the card companies spanning 1960 to 1973…and he never even touched them. My dealer bought them all from his family and had two 1971 sets untouched since the day in 1971 that Topps shipped them. “One was better,” he said. I bought that one.

When I picked them up, they resonated with me. They stuck together like they were coming out of packs back in 1971 on Buffalo Ave. in Paterson. Sure, some had centering issues just like many of the pack-fresh cards then, but they all looked like they came off the printing press yesterday. The black was so shiny the ink seemed wet.

(Looking at the players from my favorite team, I remembered asking my teacher what a “Met” was.  She looked at me quizzically. I said, “A Met, the baseball team. I know what a Tiger is. And a Cub. And a Pirate. What’s a Met?” There was no answer. With no cell phones, never mind Wiki, there wouldn’t be one until one day Bob Murphy called the team the “Metropolitans.” Okay, now I get it. “Mets” is a nickname of a nickname. Actually, that seemed pretty stupid then and it still does.)

This collecting thread throughout my life is part of my love of sports. I feel the same way about collecting—and the Mets—that I did when I was seven-years-old. There’s no analogy to it in life beyond sports. When I see those black beauties, I feel seven all over again. 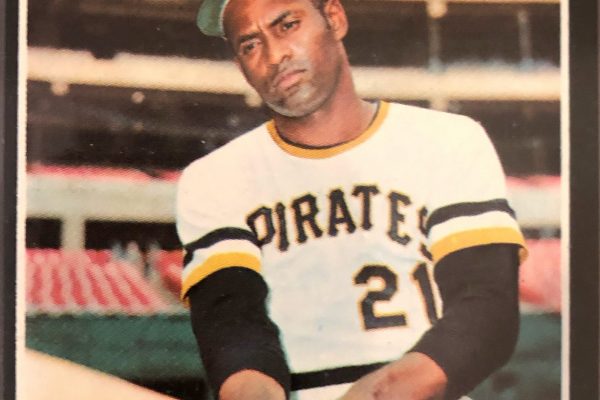 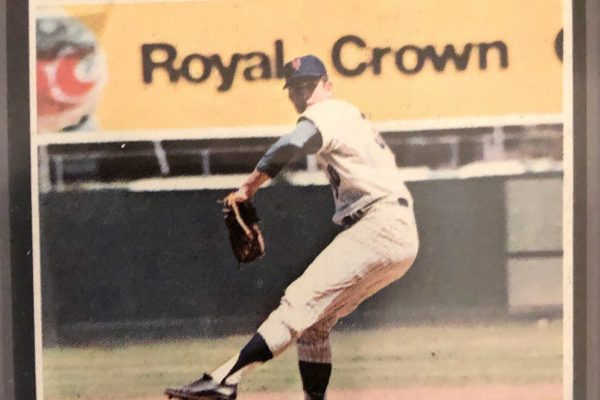 But the Pirates cards look best. The entire set feels like it was designed for the Pittsburgh’s black and gold, fitting as they would be the world champs in 1971. The Roberto Clemente with the barrel seemingly coming through the front of the card, 3D style? Stunning.

Of course, I felt my pulse race a little when I saw the orange “Mets” type and blue player names when delicately transferring cards from the box into the plastic sleeves of my new, thick binder (the set is almost 800 cards). The Nolan Ryan, taken like a number in the set “in action” for the first time in Topps history, made me want to drink a couple of bottles of RC Cola, given how prominently the logo features in the Shea Stadium background. And there’s Ryan again on the Bud Harrelson card, also a shot from an actual game play. (Does that make this a Ryan card? Hmm…)

But upgrades were needed. Of course, card No. 5, Thurman Munson, was probably a 9, but badly off-center. Topps did Thurman wrong in 1971. Dealers tell stories of getting vending sets with 100 Munsons and every one is horribly off center. Or maybe Topps did him right. Munson is the star of the set, price-wise. And if you catch the card right, it’s in the running for the most gorgeous of all-time. I settled for a centered 6.5 that was priced to sell.

The set is almost perfect but will I ever really be fully satisfied with it? Nope. That’s the nature of collecting—always be upgrading. When our current viral nightmare is over, you may just see me at your local card show, hunched over a table, looking for a NM-MT No. 632 Darrel Chaney.