FROM THE SPORTS IMMORTALS COLLECTION

Jackie Robinson was, is, and always will be among the most iconic athletes in history. This bat, signed and engraved with statistics from his 1949 MVP season, represents a one-of-a-kind artifact from the prime of his legendary career.

GET THE APP
Menu

“There’s not an American in this country free until every one of is us free.”

Robinson is not just a baseball hero, but an American hero. As a pioneer who broke baseball’s color barrier in 1947, he raised hopes and opportunities for the second half of the 20th Century. “Any assessment of Robinson’s career has to be made in the context of what he endured on the field— racial epithets, name-calling, threats, spiking, and other cruel admonitions,” says the Sporting News’s Heroes of the Hall. “Always, as demanded by [Dodgers GM] Branch Rickey, he bit his lip, and turned the other cheek, letting his hitting, baserunning, and fielding reap the only revenge he would be allowed.”

Market Cap (Seller is retaining equity)
GET THE APP

Jackie Robinson signed this Hillerich & Bradsby Louisville Slugger bat from 1950 to commemorate his best season in 1949 when he won the Most Valuable Player Award and the National League batting championship.

It is a game model made of the finest wood, 125, that is used by major leaguers.

Legendary collector Harry D. Evans neatly stenciled in Robinson’s statistics from 1949 after acquiring the bat from H&B in 1950. Evans was close to Connie Mack, the grand old man of baseball, and had great access to meeting the players in the dugout or on the field. After each season, he purchased professional model bats of each player who won the batting titles during the previous season. Evans carefully wrote each player’s stats on one side of the barrel before getting them signed by the players.

Robinson signed an endorsement contract with H&B in 1946, prior to his rookie season in 1947. As a result, all of his bats featured his facsimile signature burned into the barrel. According to factory records, his bats own the distinction of being some of the heftier pieces of lumber, explains Joe Orlando, author of Legendary Lumber; weighing in at 34-36 ounces.

Robinson signed the bat in a prominent location beneath the stenciled stats from his 1949 season. The autograph was verified by James Spence Authentication (JSA), a prominent third-party grader, and given a high grade of 7 on a scale one to 10.

Autographed Jackie Robison memorabilia is some of the most desirable in the collecting industry, particularly that from the prime of his playing career.

In 2017, Heritage Auctions sold an autographed Robinson baseball for $96,000.

Robinson’s baseball cards have skyrocketed in value. For example, over the past two years, well centered examples of his Leaf “rookie” card in PSA 7 near mint condition have doubled in value, from $19,000 to $38,000.

“Robinson’s signature is in strong demand and outweighs supply,” writes Ron Keurajian, author of Baseball Hall of Fame Autographs. “On premium items his signature is scarce.” This bat is considered to be a premium item. 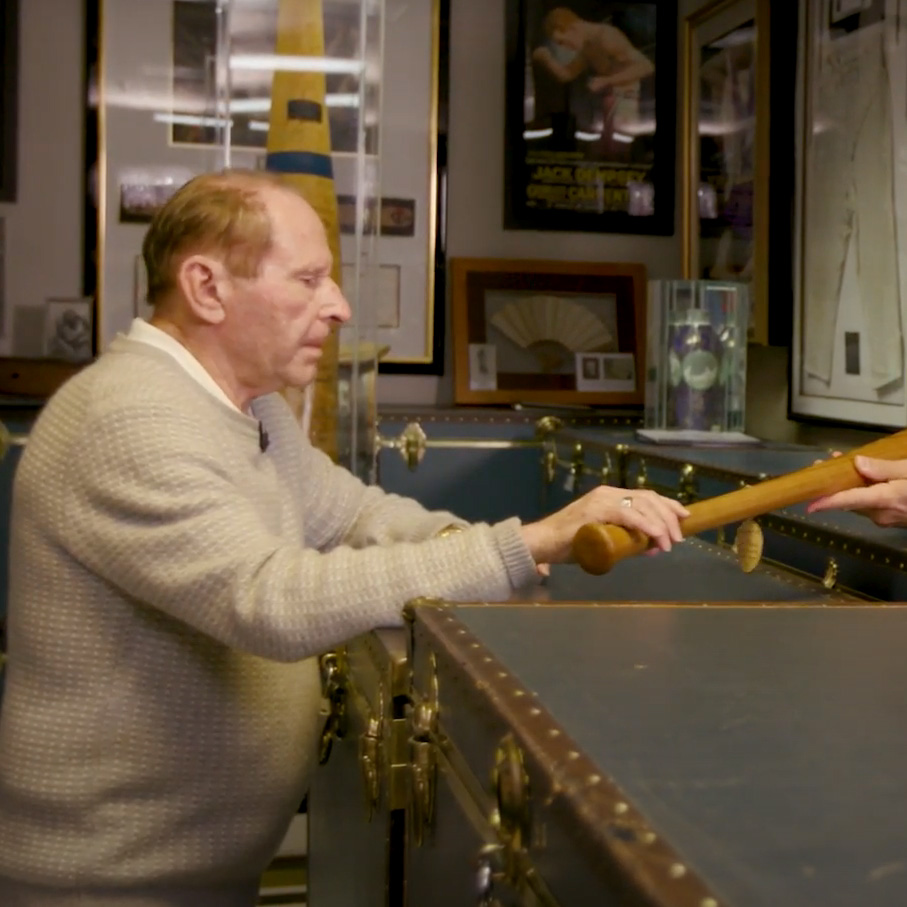 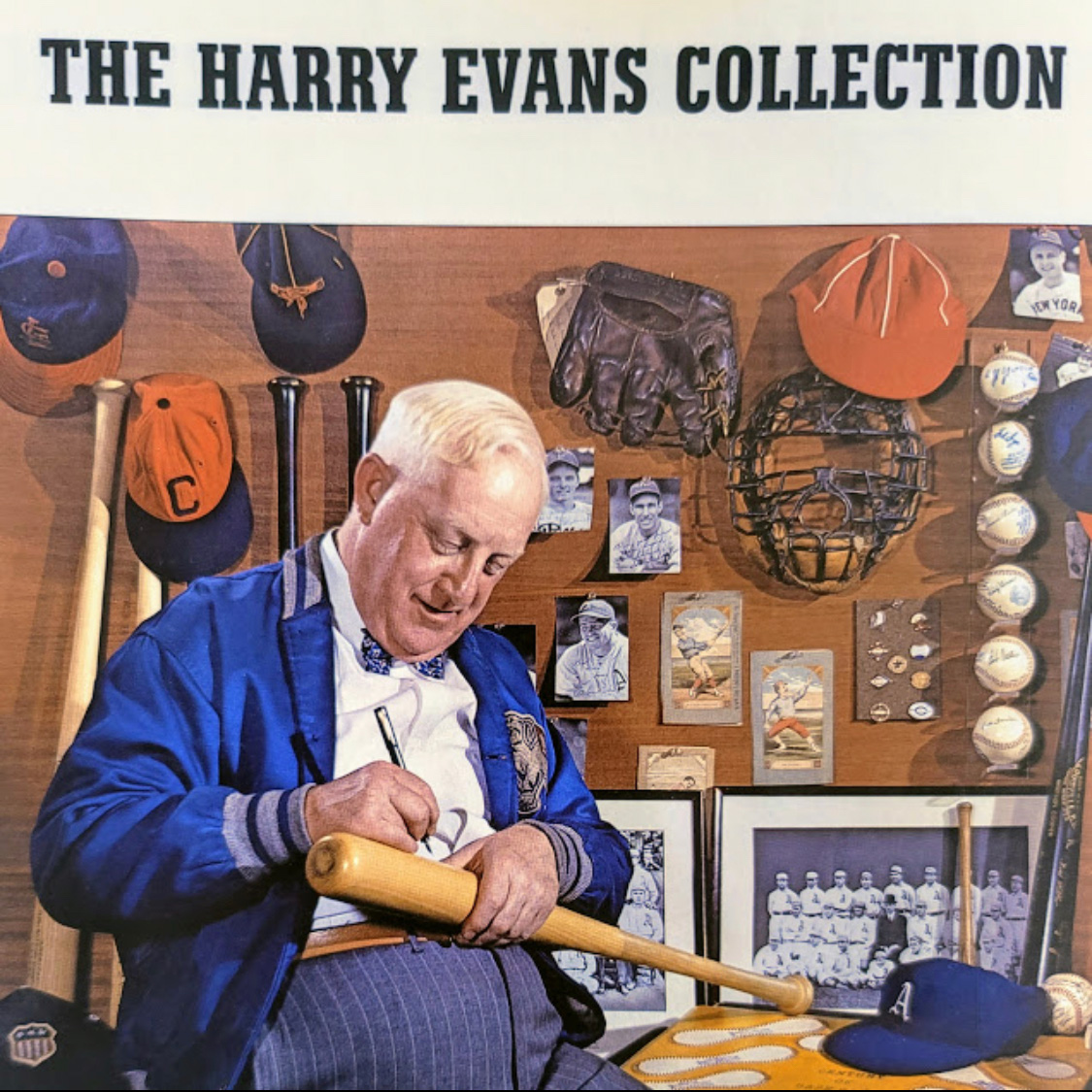 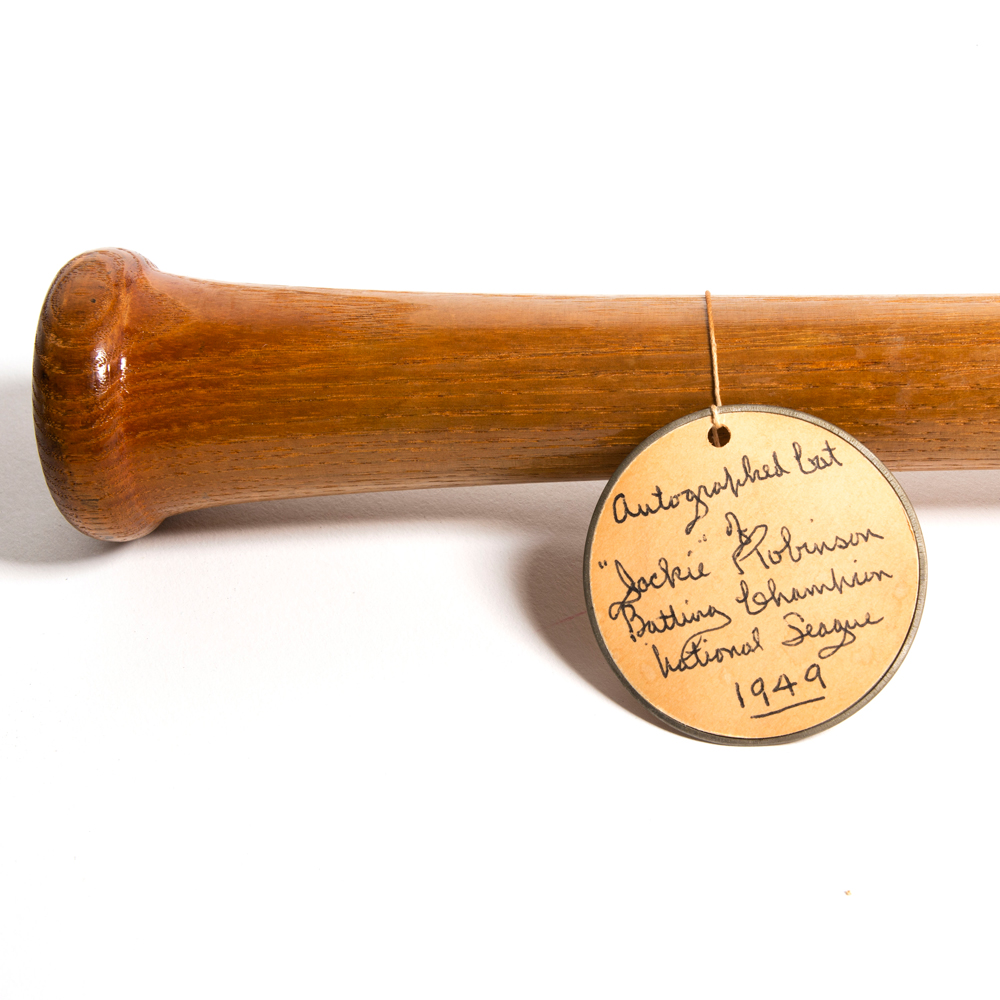 Begins his three-month tenure with the Honolulu Bears, a racially-integrated semi-pro football team.

Tries out for the Chicago White Sox.

Inducted into the U.S. Army.

Signs with the Brooklyn Dodgers organization.

Arrested for refusing to move to the back of a military bus.

Acquitted in a court martial trial.

Honorably discharged from the Army.

Tries out for the Boston Red Sox.

Signs with the Brooklyn Dodgers organization.

Plays his first game with the Dodgers.

Wins the MLB Rookie of the Year award.

Leads the Dodgers to the only World Series championship of his career.

Throws out the first pitch for the second game of the World Series.

Dies from complications of heart disease and diabetes.

Major League Baseball retires his number 44. No player in the league will ever wear it again.
GET THE APP

Alan Goldsher is Collectable’s Head of Content, as well as the author of 16 books.

That February, for instance, almost half a million New York children boycotted school as part of a protest against segregation. It was one of the largest civil rights movements to date.

Three months later, 12 potential military men burned their draft cards in protest of the Vietnam War, the first of hundreds of such anti-war demonstrations to come.

Then in July, up in Harlem, a black teenager named James Powell was killed by white police officer Thomas Gilligan. As the city was both on societal and racial hair-trigger—and in the midst of a historic heat wave—the ensuing riots felt all but inevitable.

Between July 16 and July 22, violence and protest defined the borough of Harlem. The messaging that came from the city was loaded with recriminations and rhetoric—in other words, City Hall didn’t appropriately take the temperature of the room, a temperature that was running hot—and little, if anything was accomplished to advance civil rights. In the end, over 500 people were injured and over 450 were arrested. Both the city and Harlem citizens had to be relieved that only one person was killed.

Some positivity rose from the ashes, however: The riots brought to life Project Uplift, an anti-poverty program that was determined to both lift up Harlem’s residents and keep violence at bay.

And the incident also gave Jackie Robinson an idea.

For his part, the former Brooklyn Dodgers star believed it was vital for black Harlemites to take ownership of their lives and businesses, to provide for themselves what the world-at-large couldn’t or wouldn’t. Always an outside-of-the-box thinker, Jackie believed that a good, albeit surprising way to lift the locals was to open a financial institution.

A bank for the people. Very much outside of the box.

The start-up was dubbed Freedom National Bank, a distinctly Robinson-centric name. The plan was for Freedom National to offer generous home and business loans for blacks who might otherwise have difficulty procuring funding at a typical Manhattan bank.

Wyatt Tee Walker, former executive assistant to Martin Luther King and one of the bank’s chairman, explained, “The idea was that the cultural heart of black America should have a commercial bank. Many small businesses and churches in Harlem bought stock in the bank, not with the idea that they’d reap any benefit, but rather that Freedom would be a financial resource for people in the minority community to get loans.”

Sharnia Buford, the bank’s chairman during its most successful period in the mid-1970s, noted that, as was the case during Robinson’s early years with the Brooklyn Dodgers, public scrutiny would force them to both take the high road and better than everybody else. “We had to be businesslike and our credit criteria couldn’t be different from banks downtown. But we also had a greater responsibility because we were chartered as a minority bank. We had to empathize with the customer.”

After holding the title of largest black-owned business in the country for years, Freedom National shut its doors in 1990. New York representative Charles B. Rangel echoed the heartbreak of many: “This is devastating to our community and the city. Symbolically, it’s a terrible blow, because this was a black bank formed by Jackie Robinson that was more sensitive to the businesses and people in this community.” 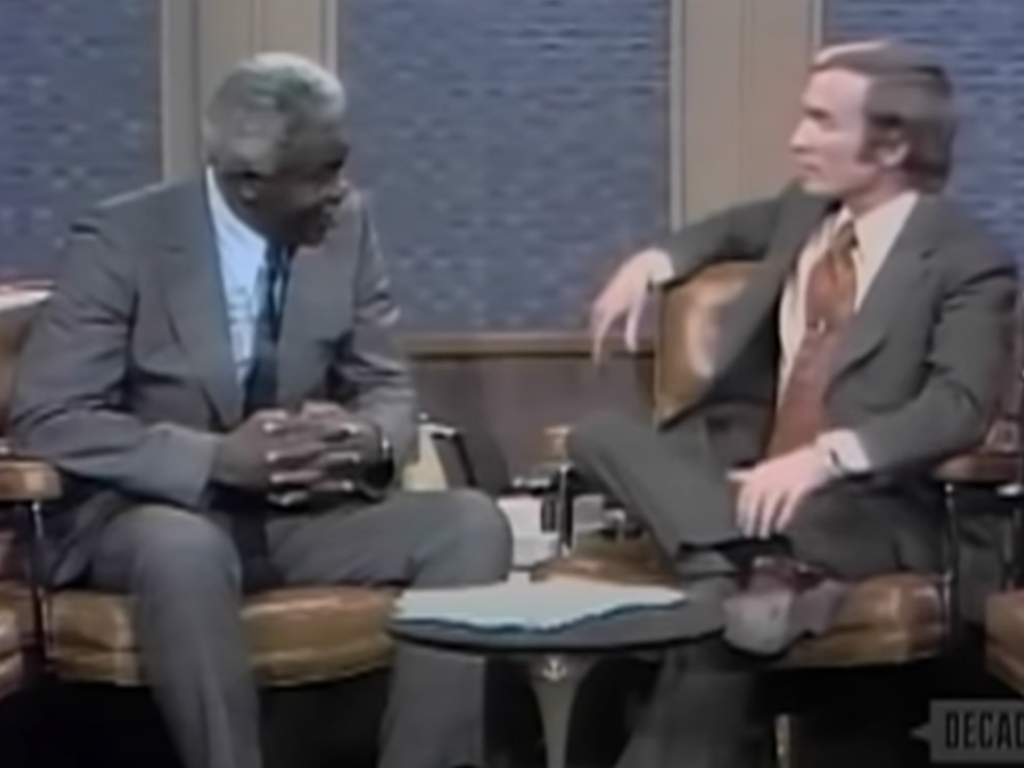 On the Jackie Robinson Construction Company and beyond

And while we’re discussing sensitivity for others, Jackie Robinson earned a PhD in the subject, this despite being the object of derision from a wildly misguided, oftentimes violent and profane segment of intolerant baseball fans. Even while dealing with the slings and arrows of an uneducated public, Robinson’s mission in life was to uplift, elevate, and unify.

“In our struggle for civil rights we must not be motivated by color but by our love of God and our love of freedom. I would resign as head of the campaign today if I thought for one moment that the NAACP was fighting only for the rights of colored people.”

In 1957, Robinson became chairman of the NAACP’s Fight for Freedom Fund, and his involvement with the organization wasn’t of the half-assed variety—he rolled up his sleeves and worked, going on a cross-country speaking tour, marching on the front lines with protestors of all races and genders, and spearheading a $100-a-plate charity dinner that raised over $15,000.

The dinner was a noteworthy success, thus the concept of alternative methods of fundraising stuck with Jackie for the remainder of his philanthropic life, best exemplified by a swinging little initiative from 1963.

Of this particularly endeavor—which was dubbed Afternoon of Jazz and would initially raise money for Martin Luther King’s Southern Christian Leadership Conference—Jackie’s wife Rachel explained, “The idea struck us that our six-acre homesite—with its large, clear pond and hill that sloped down from the house to level ground in a way that formed a natural amphitheater—would be a lovely setting for an afternoon concert.”

The lineup on that June, 1963 day was the jazz equivalent of Robinson’s 1955 Brooklyn Dodgers. Instead of Roy Campanella, Gil Hodges, Sandy Koufax, and Don Newcombe, you had Dizzy Gillespie, Dave Brubeck, Cannonball Adderley, and Billy Taylor. A Life magazine reporter nailed it when describing the raucous gig as, “A jam session for civil rights.”

In one of the day’s many highlights, just as the concert was wrapping up, Duke Ellington and his entire orchestra rolled up and wondered aloud if they could take the stage. (For non-jazz fans, a proper analogy for this would be if Jay-Z showed up after the Lollapalooza headliner wrapped their set, then asked if he could drop a few songs.) The Robinsons broke protocol and let Ellington et al blow the metaphorical roof off of the metaphorical house, a fitting conclusion to a legendary night of music and love.

The maiden Afternoon of Jazz raised $15,000, and the follow-up two months later brought in another $30,000. These magical afternoons were a regular part of the Robinson schedule—for that matter, the events continued well beyond Jackie’s passing—because, as Rachel noted, “Jazz is the perfect medium to reflect life and the need people have to improvise and transcend barriers.”

A perfect comp for the perfect event. After all, transcending barriers was Jackie’s jam.

Whether by design or happenstance, Jackie Robinson was all about leaving a tangible legacy. And man, tangible legacies take work.

As was the case with Lin Manuel Miranda’s version of Alexander Hamilton, Jackie Robinson was non-stop, even when his health began to fail. In 1970, while recovering from a heart attack, he established the Jackie Robinson Construction Company, an entity that was created to build houses for low- and moderate-income families. Their first project was the Whitney Young Manor, a 197-unit apartment development in Yonkers, then, after Jackie passed away, Rachel Robinson—who, it turns out, is equally as non-stop as her husband, even to this day—spearheaded the construction of 1,600 lower-income housing units.

But you can’t discuss Robinson’s tangible legacies without mentioning his writing. As a rookie, he wrote a column for the Pittsburgh Courier called “Jackie Robinson Says.” Ghosted by black sportswriter Wendell Smith, the column tracked Robinson’s early, often heartbreaking days with the Dodgers:

After he hung up his spikes, Robinson continued his first-person journalism with the New York Post and the New York Amsterdam News, dropping his views on pop culture, sports, politics, and, of course, race relations and civil rights. To that end, let’s finish things off with an excerpt from Jackie’s 1959 Post piece entitled “It Comes Down to You and Me.”

“I think it’s up to each of us individually to try to straighten out our own thinking as best we can. Since none of us lives in a vacuum, I’d venture to suggest that hardly any of us can lay claim to being completely unprejudiced about other races and religions. And I think once we recognize that fact, and begin trying to change it, we’re taken a giant step in preparing ourselves to be of service.”

Take an even deeper dive

How Jackie Robinson Day was observed in the face of COVID-19.

The Athletic on Robinson’s athletic legacy. 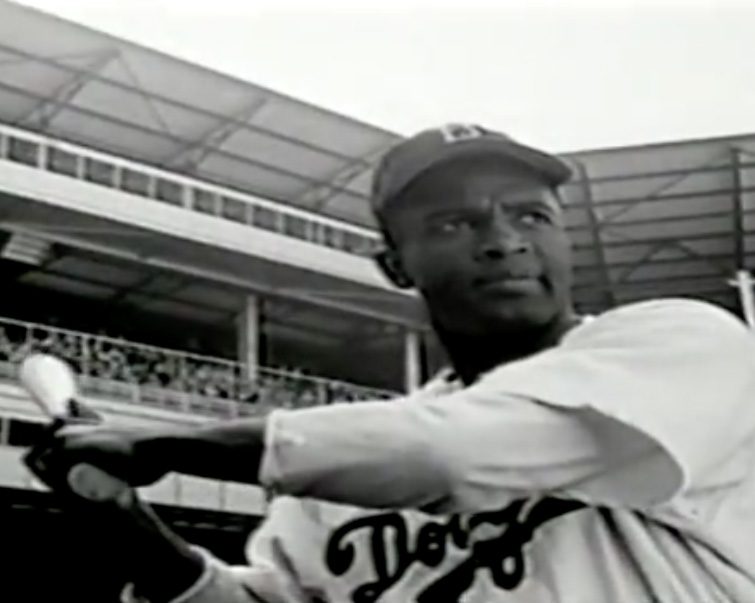 TO THE BEST, FROM THE BEST

The MLB Hall of Fame’s tribute to Robinson

AN MVP ON AN MVP 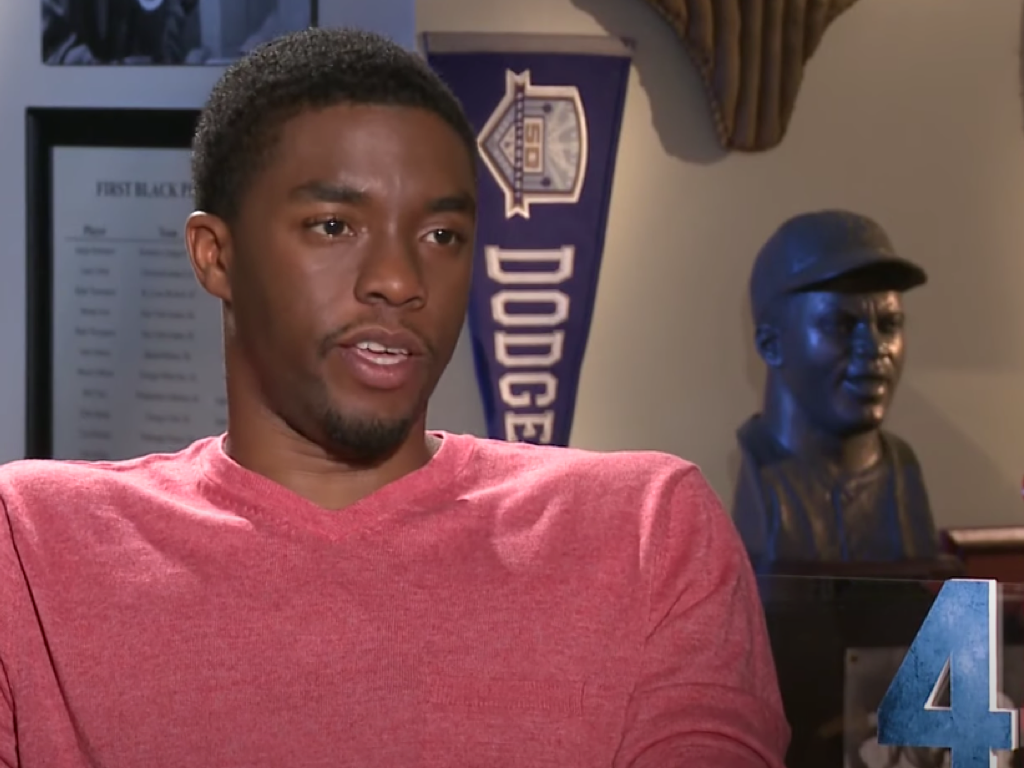